How to Apply The Third Law of Healing, The Law of Cure

The direction of healing proceeds in the body in four universal ways:

From above downward, from within outward, from most important to least important organs, and in reverse order of symptom occurrence.

“The highest ideal of cure is the rapid, gentle and permanent restoration of health; that is, the lifting and annihilation of the disease in its entire extent in the shortest, most reliable, and least disadvantageous way, according to clearly realizable principles.”

The third law of healing is the Law of Cure. Cure simply means the restoration of normal structure and function in the organism, a return to health. There can be no cure if there is no disease or dis-ease, just as there can be no normal without the reality of possible abnormality.

The body is exceedingly intelligent, operating in predictable ways that can tell the skilled practitioner in which direction healing is proceeding. There are four universal ways in which healing progresses in the body. Constantine Hering, MD, lived in the 1800s and first summarized these four directions, known as Hering’s Law of Cure. (2) 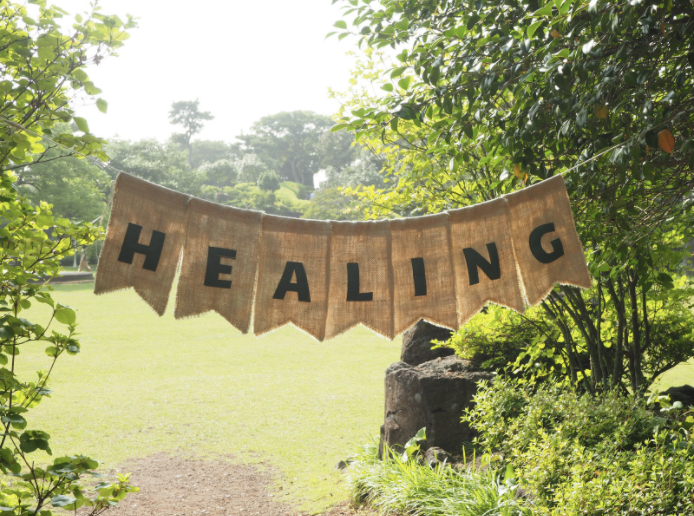 The Law of Cure

The direction of healing proceeds in the body in four universal ways: (3)

Caution: By the way, these directions should not be used to diagnose disease or healing in yourself. They are subtle signs, not hard-and-fast rules, and require years of medical training and practice to observe. Also, these potentially observable signs and symptoms of healing can be subtle and must be taken into account only when treating the totality of the person. You should work with an integrative medicine practitioner, such as a naturopathic doctor trained by an accredited naturopathic medical school, and even better, one who is also affiliated with the Naturopathic Medicine Institute (NMI).

The First Direction of Healing: From Above Downward

The first direction described in the Law of Cure is that healing or cure will move in the body from above to below, or from the top down. This means that a presenting symptom or a condition may move vertically down in the body, in the direction of the head to the toes. A simple example would be a chronic rash on the chest that moves down, for example, to the groin area, and eventually to the legs. When it resolves, it will do so in its original area(s) first, as it moves inferiorly. Another example of a potential sign or symptom of the first direction of healing would be arthritic pain moving down from the neck to the fingers.

The First Direction of Healing: From Above Downward

The first direction described in the Law of Cure is that healing or cure will move in the body from above to below, or from the top down. This means that a presenting symptom or a condition may move vertically down in the body, in the direction of the head to the toes. A simple example would be a chronic rash on the chest that moves down, for example, to the groin area, and eventually to the legs. When it resolves, it will do so in its original area(s) first, as it moves inferiorly. Another example of a potential sign or symptom of the first direction of healing would be arthritic pain moving down from the neck to the fingers.

The Second Direction of Healing: From Within Outward

The second direction, which can be more complex, is that healing or cure moves from within outward. In other words, the signs and symptoms of healing can move from a deeper layer of the body to an area more superficial. This could be seen in an infection resolving in a deeper layer of the skin first, while maintaining its appearance on the surface of the skin. The dermis heals before the epidermis. A more complex example would be a respiratory condition like asthma improving or resolving, while external symptoms, such as a rash on the arms, appear to worsen.

The Third Direction of Healing: From More Important to Less Important Organs

The third direction is the progression of healing or cure from a more important organ to a less important one. The body protects its most important organs with more resources than the less important ones, in much the same way that a military expedition is organized to protect its higher officers more than its armed forces on the periphery. The organs are ordered in the body, from most important to least important. The brain and the heart are the most important, and organs such as the lungs and the urinary tract are of less importance. You can barely exist, at least consciously, for a minute without your brain or your heart fully functioning appropriately, but you can exist much longer with a barely functioning digestive tract.

The third direction of the Law of Cure explains why conditions like lower respiratory tract and urinary tract infections are much more likely to occur than brain infections or heart infections. An example of the third direction of the Law of Cure would be a chronic respiratory infection improving, but then a patient presenting with an eczematous rash, signaling that the process is moving from the lungs to the skin.  A direction of healing is proceeding. In this example, the skin is seen to be of less immediate importance than the lungs.

Of course, the reverse can also be true, signaling a worsening of the overall condition of the organism: disease can progress from the skin, for example, to the lungs, such as in what is often seen in the atopic triad. The atopic triad is a three-fold presentation of disease, where a child with eczema subsequently develops seasonal allergies and asthma after using steroids for a period of time, showing a progression rather than a remission of disease. (4)

These signs and symptoms are mere guideposts used by the skilled health practitioner to inform their treatment of the individual, to know if a person is on the path of cure. The Law of Cure is not a hard-and-fast rule that can be readily understood by the layperson and used to diagnose and treat a disease. The Law of Cure embodies a principle which informs clinical case prognosis and provides information about how to understand whether disease or cure are imminent. Always talk with your doctor about your condition and allow them to be your healthcare collaborator and guide. In other words, don’t try this at home.

The Fourth Direction of Healing: In Reverse Order of Symptom Occurrence

The fourth direction of healing is the reversal of symptoms occurring in the order in which they first appeared in the body. An analogy to the progression or remission of disease would be taking a walk into a park and having to exit the park the same way in which you entered in order to return to your car in the parking lot. If you are to return to health, you often have to circle back whence you came; this can often show up as the reoccurrence of symptoms experienced long ago, as healing and cure proceed in the body.

Let’s move back to our example of the atopic triad, which is the three-fold presentation of eczema, allergies, and asthma in a child.Eczema, or atopic dermatitis, in a child often progresses to a condition where chronic hay fever or seasonal allergies then ensue, leading to eventual onset of chronic asthma, a process known as the atopic march. (5) In fact, up to 80% of children with eczema also have asthma or allergies. (6) An example of the direction of healing occurring in the child would be the asthma resolving or improving but then the reappearance of chronic eczema on the child’s skin, even though the child has not had this condition, with that particular presentation, for a few years. The lungs are more important than the skin for immediate survival, so this example also combines more than one of the four directions of healing.

Another example comes directly from one of my patient’s reports. She spent several weeks detoxifying for hours daily in an infrared sauna, when an old severe sunburn that she had experienced many years ago, reappeared on her torso, with exactly the same presentation as from the past. Over the course of several days, the burn from the past resolved and her skin and scarring cleared for the first time in years.

Again, these are crude, anecdotal examples to attempt an explanation of the Law of Cure, purely for illustration, but you must always work with your doctor, as each individual is unique and this potentially observable language of the progression of cure in the human body should not be used to diagnose and treat oneself or one’s family members, but should be applied and observed with the help of a naturopathic doctor or skilled integrative medicine practitioner. The directions of the Law of Cure can serve as guideposts along our healing journey as we resolve chronic disease in our bodies.

How Can We Apply the Law of Cure to Benefit Our Health?

Well, first of all, we must work with a trained practitioner; but we can also generally benefit from the knowledge that conditions affecting our more important organs, such as our brain or our heart, are usually more likely to be more serious than conditions affecting, for example, our urinary tract or our lungs.

We can seek out the help of naturopathic doctors to work with and enhance our body’s healing mechanisms, rather than suppress our symptoms with polypharmacy and potentially drive the disease deeper into our bodies.

Applying the Law of Cure:

Explore the Law of Cure by engaging in the following activities:

1. Write a letter to yourself about what your life would be like if you were free of chronic pain or chronic disease. How would things be different? Describe what it would be like using all five of your senses.

2. Pay deep attention to your symptoms and to the way they change over time. Journal about your health, if you want to.

3. Pay particular attention to the condition of your skin and realize that the skin is like a mirror of our internal health. Work with a naturopathic doctor to develop “clear skin from within,” as skin expert Trevor Holly Cates, ND, would call it. (7)

4. Take an inventory of the various diseases, illnesses, and injuries that you have experienced over your life.

5. Seek out a naturopathic doctor or another skilled, medically trained integrative healthcare practitioner, such as a functional medicine doctor, to help. guide you on your healing journey.