Can Mouthwash Cause Diabetes? 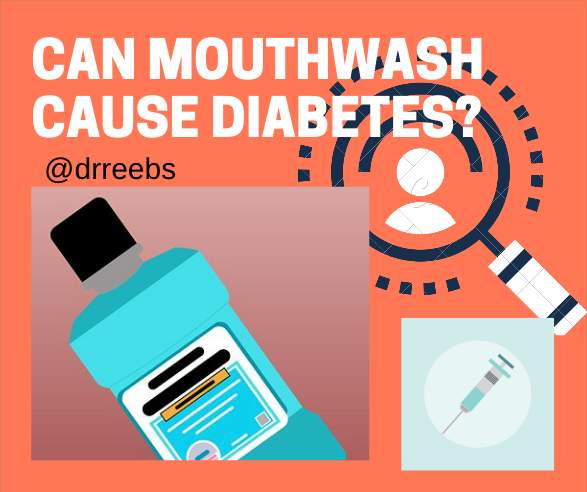 A 2017 study revealed that the use of mouthwash at least twice daily may be associated with a 50% greater likelihood of developing prediabetes/diabetes (1,2). Say what!? Is it possible that something as simple as swishing Listerine twice a day could double one’s chances of becoming diabetic?

Research into the so-called “salivary nitrate-nitrite-nitric oxide pathway” (3) has led to a growing body of evidence that there may be something to the proposed mechanism of action.

Interestingly, approximately 25% of the nitrate (the other 75% is excreted via the kidneys) that we absorb from our food (mostly from vegetables!) is uptaken by the salivary glands, where it becomes part of the saliva. (4)

This nitrate is then reduced by oral bacteria to nitrite, before it is swallowed and eventually converted to nitric oxide (NO). What is fascinating is that this nitrate helps these oral bacteria to produce energy via respiration in an anaerobic environment. (5)

The Role of Oral Bacteria in Nitric Oxide Production

Little research has been done on the oral microbiome. (6,7) The oral cavity is highly personalized, populated by bacteria strains of Streptococcus, Haemophilus (buccal mucosa), Actinomyces (supragingival plaque), Prevotella (subgingival plaque), and many more. (8)

Using a mouthwash that is “anti-bacterial” or “antiseptic” means that you’ll be indiscriminately laying waste to the good bacteria in your oral microbiome as you attempt to target the so-called bad guys, of which there are few. (9) Ironically, chronic gingivitis, dental caries, and even bad breath result from not having enough of the good guys.

Adding insult to injury, mouthwash is drying to the mouth, which disrupts saliva production. A little known fact is that saliva helps to remineralize the teeth, for example, using nutrient deposits such as phosphorous and magnesium. (10)

Putting The Mouth Back into the Body

The father of modern nutrition, Weston A. Price DDS, observed in his masterpiece, “Nutrition and Physical Degeneration,” that disease could be predicted by the state of oral health in the individual.

He, of course, traveled to many continents and observed dozens of natives in their original habitat, some of whom had not been affected, at least dietarily, by modern industrialized agriculture, which he found wreaked havoc on their oral health (and by extension, their overall health) when subsequently exposed

While disease begins in the gut, according to the father of modern medicine, Hippocrates, the gut does attach to the oral cavity. Perhaps the mouth can be considered to be an extension of the gut?

Nitric Oxide: Another Reason to Eat Your Veggies, Yo!

As a side note, some of the veggies richest in dietary nitrate are garlic and onions, eggplant and squash, arugula, beets, celery and rhubarb.

The Role of Nitric Oxide in Vascular Function

It is well established that nitric oxide (NO) plays an important role in vascular function in the body. (11) Nitric oxide is key to the function of our blood vessels, regulating vascular tone and blood flow, and inducing smooth muscle relaxation and vasodilation.

If you love mouthwash, why not go with making your own, or at least buying all-natural mouthwash? Of course, it can be tricky figuring out exactly what “all-natural” means.

Mainstream mouthwash, for the most part, is full of artificial flavorings and colorings, with inferior essential oils, industrial chemicals (such as chlorine dioxide, an antibacterial bleaching agent), chlorhexidine (antibacterial and a common allergen) and even detergents such as sodium lauryl sulfate (common in toothpaste and to which many have a sensitivity).

Shake each time before using, as baking soda settles at bottom of container. Let one tablespoon swish in your mouth for 1-2 minutes. Avoid swallowing, especially when gargling.